Online Discussion „BiH is in Europe, but when will we join the EU?“ 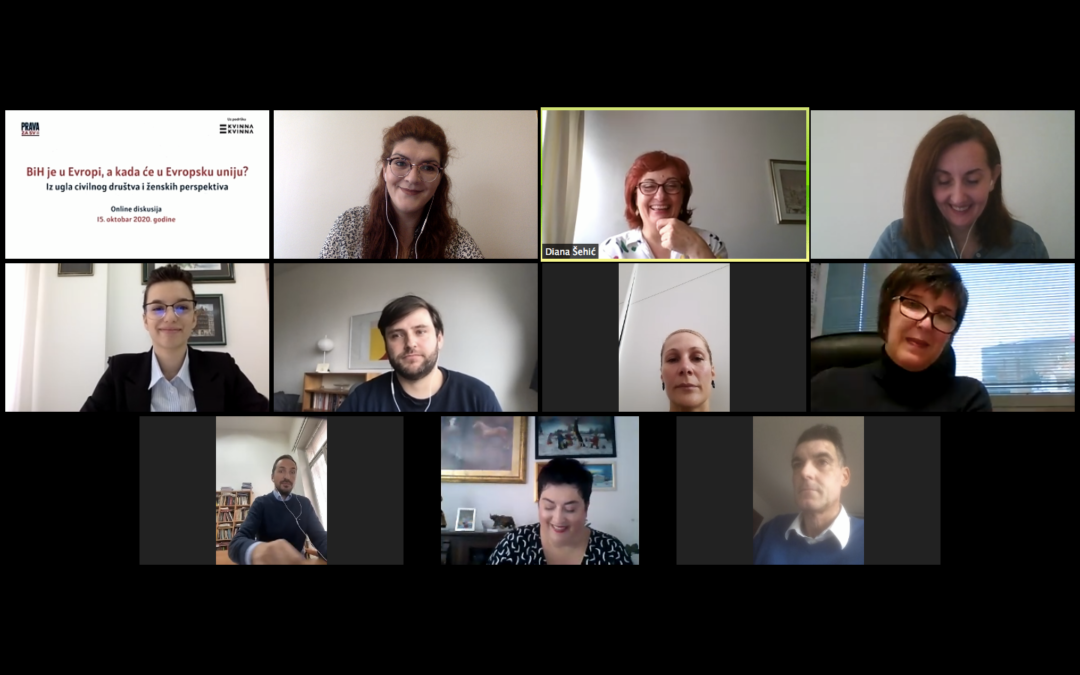 On October 15, 2020, PRAVA ZA SVE held an online discussion „Bosnia and Herzegovina is in Europe, but when will we join the European Union?“, on the process of European integration of BiH from the angle of civil society and women’s perspectives. The event was organized with the support of the Kvinna till Kvinna Foundation. Participants at the discussion were representatives of embassies, state institutions, political organizations, the academia and civil society.

In the introduction to the discussion, Director of PRAVA ZA SVE Diana Šehić emphasized the importance of the moment when this discussion is organized, right after the publication of the new report of the European Commission on the progress of BiH in the process of European integration. She stated that PRAVA ZA SVE monitor the integration process, analyze the progress, and create commentaries and recommendations which they later advocate for in front of institutions in BiH, as well as the European Union.

„Promoting and achieving gender equality is among the goals of the European Union and it is necessary to implement everything that is adopted in the reform process“, stated Gianluca Vannini, Head of Operations Section III (Social Development, Civil Society and Cross Border Cooperation) in the Delegation of the EU in BiH. He emphasized that women are not equally represented in all spheres of life, including politics, public life, decision-making and economy.

Darija Ramljak, Assistant Director at the Directorate for European Integration of BiH, stated that there is a high percentage of women in the Directorate, and commended the civil society initiative to restart the discussion on the process of European integration. Ramljak stated that many activities are in motion regarding the integration process and fulfilling the 14 priorities set forth in the Commission Opinion on Bosnia and Herzegovina’s Application for Membership of the European Union.

European Stability Initiative analyst Adnan Ćerimagić stated that in Berlin, where he works, there is little, and often unnaturally negative, talk about BiH. From his perspective, the greatest challenge in BiH is establishing what exactly is the public interest, since the process of making decisions of public interest is paralyzed, and decisions are being made in the interest of political elites or other circles connected to them. „It is necessary to create a structure which will force the politicians to listen“, emphasizes Ćerimagić. Women must have an important role in this structure, since practice in other countries has shown that women are the key element of progress for successful reforms.

Amila Žero, a member of the Women’s Advocacy Group, noticed that the country’s reform programs neglect women’s rights and gender equality, both in analyzing the current state and in proposing future measures. „It is sad that youth and women, who comprise the majority of the society, are considered vulnerable categories“, stated Žero. She added that youth will fight for opportunities, and they will not allow to be forced out of the country.

In responding to a question on follow-up activities, Gianluca Vannini stated that there will be consultations with civil society organizations and that there are sub-committees on each segment of the acquis, which will consult with both institutions, as well as with the civil society, in order to organize the priorities and propose solutions.

While closing the discussion, PRAVA ZA SVE Director Diana Šehić emphasized that it is necessary to open the dialogue on the role of CSOs in the process of European integration, and that there are organizations that have something to say in and about this process.