Student practice: the right path to a job 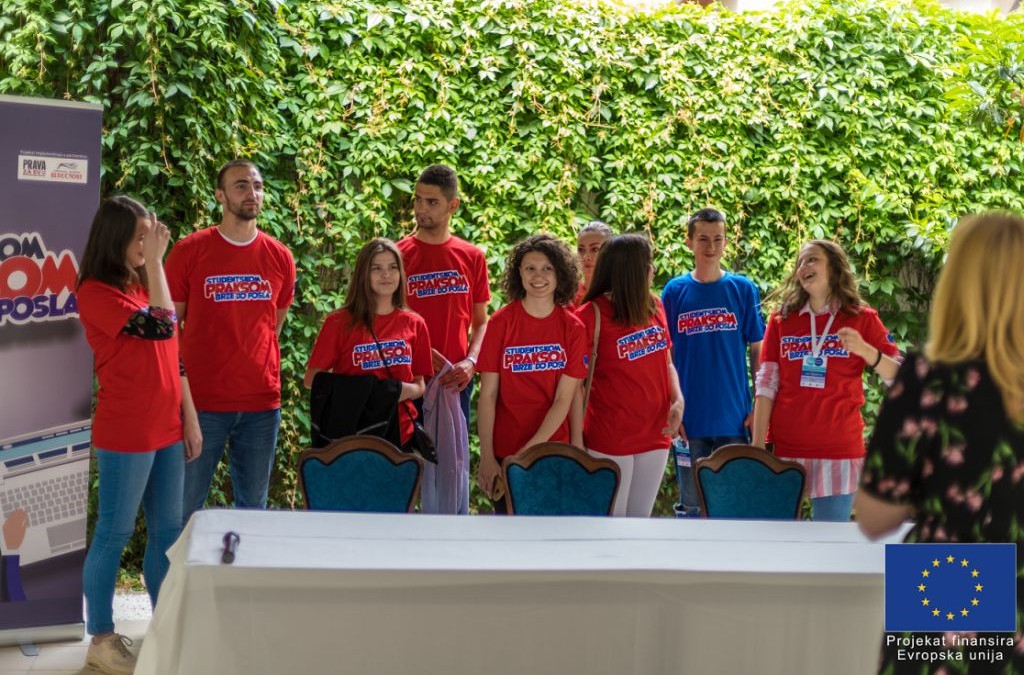 According to available data, an average of thirty thousand people leaves Bosnia and Herzegovina every year. Most of them leave their country for subsistence. Among them, there are many young people who, after their graduation, encountered the problem of finding adequate employment in the area in which they were trained.

Although the problem of the education system in Bosnia and Herzegovina not corresponding with the labour market needs has long been recognized as one of the biggest obstacles to reducing the youth unemployment, so far there has not been any serious, coherent and comprehensive approach to prepare students for what awaits them when they swap the students service for the employment service. A link that would bring together educational institutions and employers into a single chain was so far missing.

Early this year an EU-funded project called Student Practice: a fast track to a job was presented. The project is implemented by civil society organizations, namely the Association Prava za sve from Sarajevo in cooperation with its partner organization Budućnost from Modriča with the support of the European Union. This project is the first of this kind in our country, and it aims to establish sustainable and lasting partnerships between academia, civil society, and the business community to introduce a new approach in higher education.

The project brings together universities, student associations, employers’ associations, individual companies, civil society organizations – all those who can work together to ensure that students acquire practical knowledge already during the educational process that will help them find employment. The overall objective of the project is to support the higher education reform that will allow students to gain hands-on experience equal to that in the EU countries, as well as to achieve cross-sectoral cooperation in entrepreneurship-based learning.

Connecting student organizations with future employers is particularly important, says Diana Šehić, director of the association „Prava za sve“. This must be done systematically and cannot depend solely on the actions of „head-hunters“ who operate in some industries.

Establishing links between academia and business community is not only in the interest of students but also of employers as it gives them a chance to have employees who can meet their requirements from the very beginning, said Šehić, emphasizing that student practice must become a compulsory part of the education process that applies to all students equally. In doing so, practicals as part of the education process must be clearly distinguished from student practice, which contains elements of concrete work experience.

It is particularly important to point out that the Student Practice: a fast track to a job project transcends the boundaries that exist within Bosnia and Herzegovina in terms of education and business as it involves participants from both Entities, the private, state and non-governmental sectors. Universities from both the Federation of BiH and Republika Srpska as well as employers’ associations take part in the project. Recognised as a project that responds to the needs of society and attempts to introduce a part of modern European practice in our country, this project is supported by the EU Delegation.

According to the association „Prava za sve“, the project has raised the interest of a large number of organizations, and already in the early stage over forty organizations, educational institutions and economic operators have joined it, including some of Bosnia and Herzegovina’s leading companies in the area of information technology, finance, and social science. They are all part of Education – Reform – Security – Existence Network (ERSE), a driver of change in the triangle of academia, business and civil society organisations.

The concept of student practice needs to be brought closer to the public through a media campaign, while ERSE Network can ensure a proactive approach to employment and thus create an ambiance of genuine concern for young people, says Diana Šehić. According to her, the project also works on mapping the current situation and needs, as currently there is no data available on student practice in our country. All previous activities related to student practice were isolated events, without much coordination among the stakeholders or a unique model.

The fact that the Canton of Sarajevo has already passed a new Law on higher education introducing an obligation of student practice during the study, and that the University of Sarajevo has already formed a working group tasked with designing student internship programmes that will provide students with skills that will make them more competitive in the job market shows that the things are moving in a positive direction. In the next three years of the project, we can certainly expect many new initiatives and concrete measures that will help implement the ideas incorporated in the title of the initiative – make it easier for the youth of Bosnia and Herzegovina to find a job.