How much money is invested in gender equality in BiH? 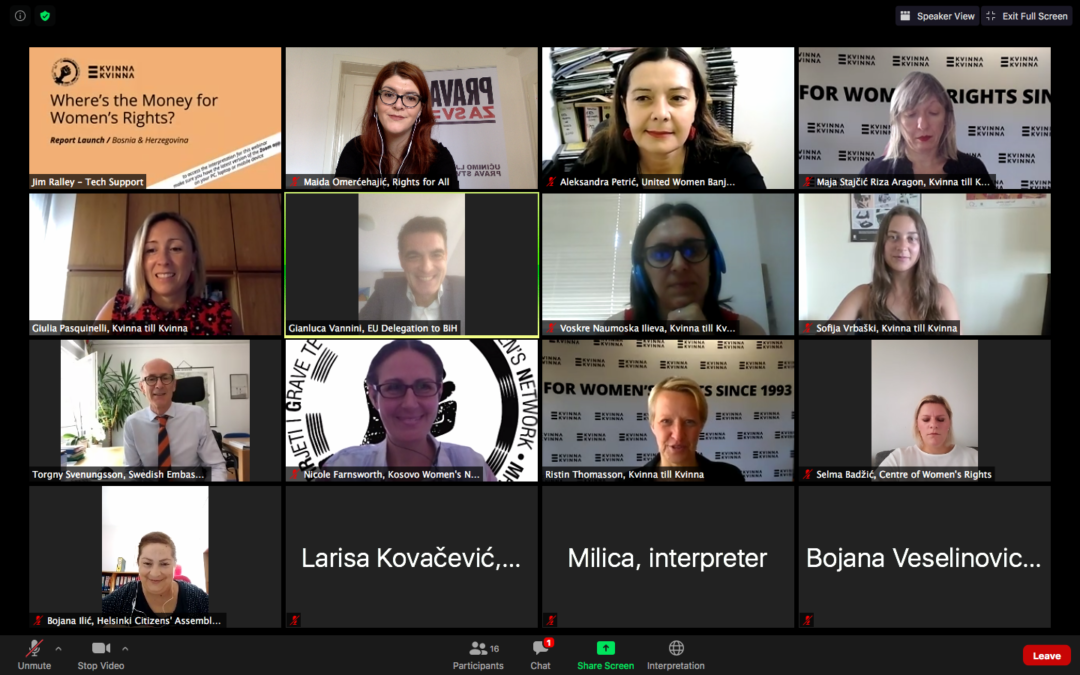 In 2019, PRAVA ZA SVE participated in a regional research project “Funding the Women’s Movement in the Western Balkans” and coordinated the research process in Bosnia and Herzegovina, with the financial support of the Kvinna till Kvinna Foundation and regional coordination by the Kosovo Women’s Network.

The result of the project is the publication “Where’s the Money for Women’s Rights?”, which includes the accomplishments, funding trends and the needs of the women’s movement, based on conducted interviews with WCSOs and funders in Albania, BiH, Montenegro, Kosovo, North Macedonia and Serbia.

The research findings focusing on BiH were presented on September 17, 2020. The speakers at the event were Gianluca Vannini (Delegation of the EU in BiH), Torgny Svenungsson (Swedish Embassy in BiH), Ristin Thomasson (Kvinna till Kvinna), Selma Badžić (Center of Women’s Rights Zenica), Larisa Kovačević (Better Future Tuzla) and Maida Omerćehajić (Rights for All). The results of the research and recommendations were presented by lead researcher Nicole Farnsworth from the Kosovo Women’s Network.

The findings indicate that there is a lack of support from government institutions – only 3% of funds received by WCSOs in BiH was provided by the government. Financial support is key for the continuation of the work of WCSOs in BiH – 75% of WCSOs did not have enough funds at a certain time, and approximately one third was in danger of closing due to lack of funds. „CSOs in BiH, especially those working on women’s rights and gender equality, have been facing the problem of shrinking space and lack of financial support for years. This research illustrates the achievements of the women’s movement, but also identifies the areas where we need support the most, whether through specific programs or core funding which could provide flexibility and freedom to react to unforeseen events and create strategies for future steps“, said Maida Omerćehajić, Legal Advisor at Rights for All.